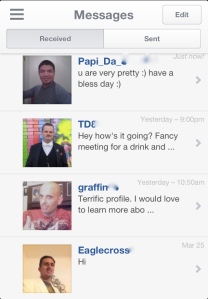 It’s slim pickings nowadays in the online dating world.  I think the picture above says it all.  I have not been going on many dates lately because I have been contacted by creepy, creepier, and creepiest.  They just progressively get worse.  It’s extremely discouraging and further supports my previous sentiments about online dating but for some reason I am still on the website. I can’t complain, I have gotten some great stories out of it and pictures to boot.

As I looked through the visitors who contacted me, the game Fuck, Marry, Cliff came to mind.  Your friend would name either 3 really awesome people or 3 really awful people and you’d have to pick who you would fuck, who you would marry, and who you would throw off a cliff.  I know it’s a sick game but I didn’t make it up and most people have played it at some point in their life.  So the picture above reminded me of that game and my immediate reaction was to throw myself off the cliff…in every scenario.  I’m sure some of them are great people but that doesn’t mean I have any interest.  Especially when the first impression is an embarrassing screen name, questionable picture, and/or a boring or uncomfortable message.

Let’s examine the average visitor who contacts me from the random sample above.  Okay, Papi Da S. is the least harmless but anyone who refers to themselves in third person as Papi will probably not be my soulmate.  So let’s start with TD.  Was this glamour shot taken before the Key Club Intergenerational Prom or is this just business cas?  Between the tux with the coattails and using the word fancy in his greeting (especially when it is asking if I would be interested in doing something) that’s already two strikes at first glance. Let’s move onto the next Don Juan, Graffin65.   For some reason I automatically assume he’s had a skin graft from looking at his screen name and picture.  Maybe a name change would be advisable.  Nevertheless, he looks like a solid candidate…for a free meth clinic.  Besides the fact that he was probably tweaking in Tompkins Square Park when I was born, he’s almost 20 years older than me.  That would be fine except for the fact that my profile explicitly says I’m looking for someone 28-36.  He was only about a decade off…give or take.  I hope he is on drugs if simple mathematics is a struggle at 48 years old.  I don’t know if we’ve saved the best for last but EagleCross is certainly special.  What really sealed the deal for me was his 1987 Miami Vice getup and the stimulating conversation, “Hi”.  I hope he’s not depending on his wit and good fashion sense to win people over.

Since I’m not someone who avidly looks for dates, I usually only go on the site when someone messages me.  Unfortunately, the characters above are the usual suspects contacting me so last time I took a glance at the visitors section.  I came across a really disturbing profile that put everything into perspective.  Warning: This may not be appropriate for people with sight. 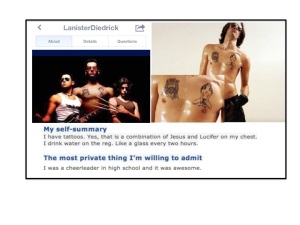 Yes, that is a tattoo of Jesus and Lucifer on his chest.  Yes, he drinks water on the reg and was a cheerleader in high school.  He’s one bad ass cheerleader.  His pictures may be disturbing but his sob story about his Miniature Dachshund, which seems like an appropriate breed for him, brought some depth and humanity to his character.  His entire profile was one big cliche but I highlighted the most important parts.  He wasn’t even the weirdest guy just the most notable that looked at my profile in the past day.  This made the list of guys who contacted me look better and better each second.  I might have to reevaluate that Fuck, Marry, Cliff game…or just wait until someone who seems like a viable option contacts me.

The one thing I do appreciate about the Goth Cheerleader is that he is realistic.  I think he could tell that we probably weren’t a good fit just by looking at pictures and my profile.  I may have a tattoo on my chest of a devil’s pitchfork busting through a Star of David and only wear leather chaps on Saturdays, but that’s private.  He could probably tell his hair band facade was too hard core for me.  Seriously though, these sites are supposed to be convenient AND help you to avoid meeting someone who has nothing in common with you.  That’s what the short profile is for.  No, my profile does not capture all of me but it is a good starting point to see if we have similar interests and are attracted to each other.  I give a good enough description of who I am and clearly state what I’m looking for.  If you’re too lazy to read or just don’t care then you better have something amazing to grab my attention.  “You’re pretty” and “Hi” don’t quite cut it.  You need to be smart, witty, or so handsome that I couldn’t refuse a date.  All three separately are pretty rare so hoping for a triple threat is pretty unrealistic.

That’s all I’m asking for.  Some realistic expectations.  I don’t think I’m Bar Refaeli but I’m also not contacting someone that looks like David Beckham.  There’s being bold and having courage to contact someone, which I fully support.   And then there’s being completely out of your league.  This is not determined just on looks but intelligence, morals, and interests.  Opposites do attract but there’s at least something that holds a common bond.  So to improve your chances and your self esteem, a good rule is to list three things about the person you like or interests you (besides thinking they’re hot and wanting to bang them) before you make contact or respond.

So if you ever find yourself picking the lesser of two, three, or four evils, do nothing.  Don’t settle!  Someone good for you is out there and if not online then somewhere.  Adjust your expectations of yourself and others and the dating process gets better.  I’ve recently done this for myself and I am actually talking to a few guys with potential.  Now at least I’m having conversations and going on dates with people that I actually want to meet.  If it goes horribly wrong then at least my readers have something to laugh about.

To everyone celebrating Passover, Easter, and Holi- Cheers!  To staying away from the cliff and finding someone you can fuck and marry!  Happy Holidays!

Babble along with Bev on her journey. Follow here!